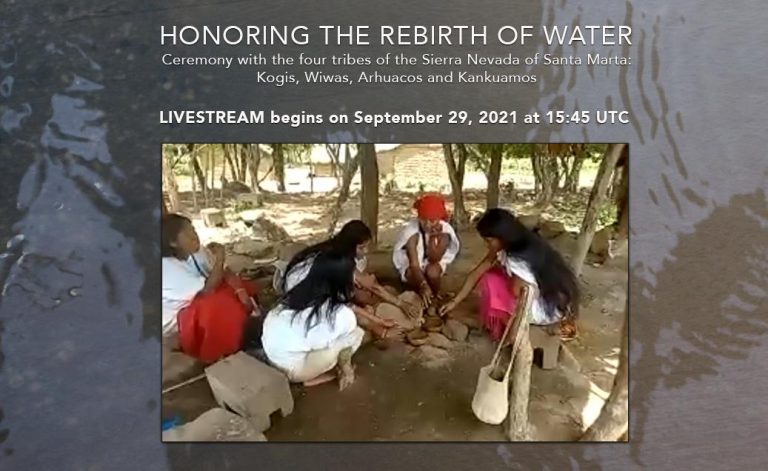 Honoring the Rebirth of Water

Rejoice, because Mother Water has been born today in the Sierra – This is the formal announcement of a new cycle for the Water on planet Earth.
~ Message from the Sagas of the Sierra Nevada de Santa Marta, 22.9.2021

On September 22, 2021, over 70 Activation Circles formed around the world for a Global Equinox Ceremony dedicated to the protection and honoring of all Water. Many circles also read out the World Water Law.

One of the circles that gathered was a circle of Sagas in northern Colombia. Sagas are female spiritual leaders of the four tribes of the Sierra Nevada of Santa Marta: Kogis, Wiwas, Arhuacos and Kankuamos. During the ceremony, the Sagas announced that this was a momentous day because Mother Water was rebirthed in a new cycle on planet Earth.

This was the message from the Sagas as translated by Mamo Rodrigo:

Rejoice, because Mother Water has been born today in the Sierra – This is the formal announcement of a new cycle for the Water on planet Earth. And that’s why they decided that they needed to follow the strict protocol that is followed in the Sierra when a baby is born. (see below)

The Sagas repeated: Today, Mother Water was born in the Sierra. So in seven days, we will meet again. This time with the Mamos to officially baptise the baby who was born today in the Sierra…

According to the birthing protocol, as clarified by translator and Kogi liaison, Ginny Griego, from the time of birth until the 7 days after, the Sagas are with the new born. Men are not allowed to enter the sacred space of the women and the newborn. During the ceremony of the Sagas, it became clear through divination, that the Mamos, the male spiritual leaders, were not given permission to join the ceremony, even though they had initially intended to join. Given the unfolding of the ceremony and the announcement of the birth of Water, they said there will be another ceremony, 7 days after the Equinox, for the formal ‘baptism” of Water which the Mamos will join. At this event the Mamos will also offer the message to humanity that they had intended to offer on the Equinox ceremony.